Why:  When the subdivision was constructed in 1975-76, the developer established an agreement with Fairfax County in accordance with Virginia Code to set aside portions of the property as “open space” that is owned in-common by the homeowners and cannot be developed or sold.  This “open space”, also known as “common lands,”  consists of three parcels totaling just over 8 acres of wooded land (see map below).  The HOA exists to maintain and manage these common lands and carry liability insurance for them on behalf of the homeowners.

Where:  The HOA consists of the following addresses, depicted on the adjacent map, along with the borders of the common lands. 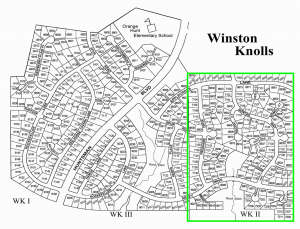 History: The HOA was established in 1975 but fell dormant in 1983 until 2004 when residents re-started it upon realizing they were liable for injuries or loss within the common lands. If you’re interested in more historical details, read here:  HOA history.